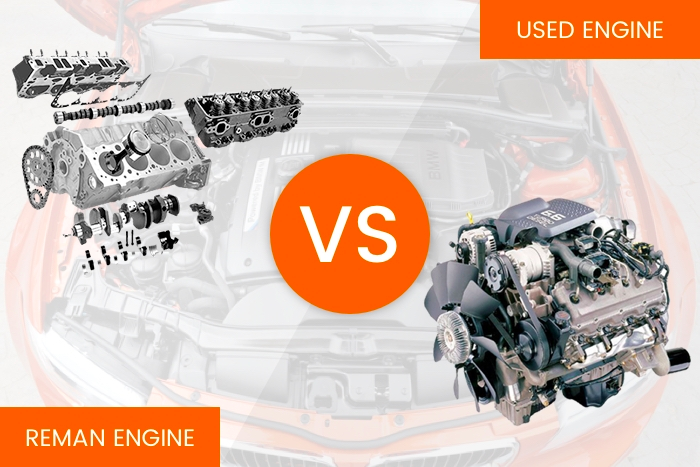 When vehicle owners experience an engine failure, and they have run out of their manufacturer’s warranty, more often than not, they will either take the vehicle to a shop or a dealer so as to consider the options available before them.

Most times, as the vehicle owner, you will be faced with the choice of either purchasing a remanufactured engine or going the path of purchasing a used engine for your vehicle. This brings us to the question we have below.

DO YOU WANT REMANUFACTURED OR USED PARTS?

The choice of remanufactured engine or a used engine offer vehicle owners who have issues of engine failure a very exciting alternative to purchasing a new engine. It provides them with a great option of more than 40% - 60% reduction in terms of cost, compared to purchasing new engines.

As a shop owner or dealer, if you have customers who come into your shop with a blown engine problem, you will have to know the best option for them so as to get them back to hitting the road as quickly as possible.

In the case where the customer has run out of warranty, you will have to recommend the best option to the customer with respect to their budget and needs. It always comes down to two options you could recommend to your customers: Remanufactured engines and Used engines

WE OFFER BOTH OPTIONS

We offer to our customers both, the option of remanufactured engines as well as that of used engines. We can only give advice and sincere recommendations on which one would be best for your vehicle based on your budget and the number of years the engine is to be used. The ultimate decision will have to be made by you.

We offer the two options to meet your desired need, and we will make sure you are well informed before you settle for any one option. This is why this article provides our customers with a thorough analysis of the benefits and downsides of either of the two options they may want to consider.

Whereas remanufactured engines have been designed very closely to the original make of the engine and have undergone thorough inspections and screening, rebuilt engines, on the other hand, are engines which have only been reconditioned by only putting new parts or components in place of broken or worn out parts.

These parts are not usually of high quality, and they usually differ from one rebuilder to the other. You must stay away from rebuilt engines.

Remanufactured engines are engines which are made up of various parts of reassembled or rejuvenated older engines and they are designed to work as effectively as the new ones at much-reduced prices.

What happens is that old engines which obviously may be faced with some serious issues are disassembled, and then any parts of them with very obvious damages are scrapped while the parts remaining (such as the block, heads, camshafts, crankshafts, water pump, pistons, rods, etc.) are inspected thoroughly.

The inspection of remanufactured engines is usually very thorough. Both the engine blocks and the cylinder heads are fully x-rayed, while the measurement is done on the pistons by means of micrometers so as to capture any issue that may not be visible to the naked eyes.

It is all the various parts or components that have succeeded in passing the inspection exercise that is collected together alongside bearings, piston rings, etc to make another engine (a relatively new one).

The cost that you will have to incur as a result of a broken down vehicle engine could actually be on the high side irrespective of whether you decide to go for a remanufactured engine or a used one.

Basically, when you decide to buy a remanufactured engine, what you are paying for is exactly only a few new parts which have thoroughly been inspected. This is what makes them more expensive than new engines and less expensive than used ones as well.

Also, remanufactured engines come with a warranty because of the fact that they make use of used components.

Having a warranty does not indicate that something will go wrong in the function of the engine; it only means that you are provided with extra assurance that the product you are getting is of a very high quality since it has been inspected by experts.

For used engines on the other hand, you have no guarantee that the engine you intend to buy will last for a long time. What this means is that, should there be a case of lack of maintenance by the previous user, or any damage which may have gone unnoticed during inspection, the new user will have to actually spend more in the long term.

On the contrary, if you will be using the engine for racing, it is advised to not go with either a new engine or a remanufactured engine. A new engine off the lot will just be efficient for you since racing will put lots of undue stress on the engine and would consequently result in failure during racing actions.

Remanufactured engines have the ability to increase the life of your vehicle and make you see no need for purchasing a new engine. By this, the resources and energy which have been utilized for the manufacturing of new vehicles will be conserved. By choosing to purchase a remanufactured engine, you are not only helping to keep the environment safe and very friendly (by discouraging scrap), but you are also helping to make sure people are gainfully employed and useful too.

Used engines are exactly what the name implies. They are not the same as remanufactured engines. Used engines are engines that have been used in a former vehicle that is similar to the new one where it is intended to be used, and which will consequently be transplanted into the new vehicle.

In simple words, they are usually removed from vehicles that have been scrapped such as vehicles damaged by flood, wrecked vehicle, etc. These kinds of engines have more disadvantages than they have benefits.

For one thing, these used engines do not carry longer warranty. However, people prefer them because of the savings they make in terms of cost from just buying these engines, but it is counter-effective to buy them since you will spend more due to the damaging effect. The only benefit used engines have over remanufactured is just the cost (at least in the short term).

On the other hand, you could actually be fortunate with these engines especially if the previous owner handled the engines very well, or if the vehicle was scrapped as a result of a car accident that did not result in damage to the engine.

But on a general note, you cannot be too sure about the history of a particular used engine you intend to buy as regards whether the engine was previously involved in a flood, or whether the owner handled it very well, or if the engine had been laying around in the junkyard.

You should only consider purchasing a used engine as the last resort if you believe you cannot afford a new one or preferably a remanufactured one. Should you decide to get a used engine, it is very important you enquire thoroughly about the history of its use, and make sure to get it properly inspected and tested by experts.

Even this, is not a guarantee for a used engine. It is not the safer option compared to purchasing a remanufactured engine.

SO WHAT SHOULD YOU USE?

Even though the exterior of remanufactured engines are not entirely replaced (except if they are damaged) the interior parts which are replaced are ensured to comply with the standard specifications and inspections.

In fact, it is basically a new engine in an old body. The interior parts are of very high quality, and because of the way these remanufactured parts are sourced, they offer a far better value than used ones or even new engines do.

First, they are collected from broken down engines, and then they are meticulously inspected before being reassembled to remanufacture a new engine. Most of the bearings, seals and other essential parts used in a remanufactured engine are replaced.

The engine is always assembled in exactly the same facility that is responsible for building new engines. After the process is completed, it is given out with a sizeable warranty.

WOULD YOU PREFER TO BUY USED ENGINE?

However, if you are thinking in the long term, and when you carefully consider the rigorous standards for testing and assembling the various parts, the excellent warranty, and what is more, the excellent pricing, it would be very unwise to argue against purchasing remanufactured engines.

By a great margin, remanufactured engines are much more efficient, and cost-effective than used engines are. It is now a matter of whether you would still prefer to purchase a used engine.

In a nutshell, we will not make a choice for you; rather, we would guide you by making sure you are well informed of both the benefits and disadvantages of either of the two options. Whichever of the two you decide to go with will have to do with the budget you have for making the purchase, as well as the need and the number of years you intend for the use.

When it comes to the point when repair is not an option, and you don’t want to invest in a new or used car, it’s time to decide Used, Rebuilt or Remanufactured? Here are your options:

All of these options may appeal to you for different reasons.

Let’s go through Pro’s and Con’s, so you can make an informed decision.

Rebuilding transmission involves replacing worn or defective parts or components in your transmission. Sometimes, parts from donor vehicles are used as a replacement.

May save you some money

Create other components to fail.

Warranty on rebuilt transmissions are usually 90 days to 6 months (Is the warranty parts only?)

During transmission remanufacturing process, all worn parts are re-machined or replaced with new OEM parts as opposed to just replacing the ones that don’t work.

Our Top Quality Remanufactured Transmissions include the following:

A remanufactured and improved torque converter is included with every transmission.

To eliminate the possibility of front seal leaks, vibration, and premature bushing wear, all torque converters are tested for leaks, lock-up, concentricity, and balance.

All wear-prone valves are restored to stringent specifications and vacuum tested to confirm proper function.

All remanufactured transmissions are backed by the industry's best, no-hassle nationwide warranty.

Problems with original design are addressed and updated

Could be slightly higher priced than rebuilt

Used transmissions are normally dismantled from the donor’s vehicle. Unfortunately, while purchasing any used part, we have no knowledge of how the donor vehicle was serviced. Just looking at the mileage of a donor’s vehicle, does not give us any idea if it was properly maintained. You may save some money going used, but remember, that the risk of failure is there, so pay attention to the warranty coverage.